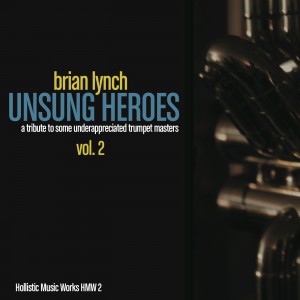 “Whether or not they realize it, jazz players owe a serious nod to the many musicians through the years who have influenced and helped shape the branches on the musical tree…not just the household name players, but the many others – active or deceased – who’ve been innovators in their own way. Brian Lynch understands this big time….Lynch and his band…take the music of the aforementioned innovators and add their own contemporary stamp. It is a beautiful project…. Lynch has developed a great way to pay forward the influences that he absorbed.”  – KEN FRANCKLING, Jazz Notes

“The series is more than a tribute; it’s an effort to preserve and perpetuate the bop legacy….While releases like Unsung Heroes appear with some frequency, few sound as accomplished or exuberant.”
–ERIC FINE, Downbeat (***** 5 Star Review for Vol.1)

“Brian Lynch’s valid thesis is that the great jazz trumpet tradition has been created not only by towering figures like Louis and Dizzy and Miles, but by second-echelon players like Tommy Turrentine, Idrees Sulieman, Louis Smith, Claudio Roditi, Kamau Adilifu, Joe Gordon, Ira Sullivan and Charles Tolliver…. Lynch is an articulate trumpet player with his own polished concept, and he does not attempt to mimic the styles of his heroes. His tributes go deeper….Most of all, what makes these tributes authentic is the high level of creative execution throughout Lynch’s sextet.”  –THOMAS CONRAD, Jazz Times

“This isn’t the first sort of “legacy” project in your discography but it seems to be the one getting the most attention….The unearthing of these unrecorded compositions is a major contribution to these musicians you’re celebrating.” –LAZARO VEGA, Blue Lake Public Radio

Grammy© Award winning trumpeter Brian Lynch created a decided stir in 2011 with the release of his Unsung Heroes project. Both an affirmation of his tradition-drenched roots in modern Black American Music (A Jazz Messenger, Brian was also a long time member of Horace Silver’s Quintet as a young man and “paid his dues” with myriad figures of the real jazz tradition including Charles McPherson, Benny Golson, the Phil Woods Quintet, etc.) and a bold statement of artistic self-determination (Unsung Heroes was the maiden voyage of Brian’s label Hollistic MusicWorks, dedicated to independence of the artist and integrity of the music expressed by 21st century means), Unsung Heroes received attention and acclaim far past what is usually expected from what Brian himself described as a “…collection of unpretentious and straight ahead music”, including a 5 star review in Downbeat Magazine. This is an indication of the rare excellence of the Unsung Heroes project, in its fresh conception and in its brilliant and swinging execution by the Unsung Heroes band (Lynch, alto sax master Vincent Herring, tenor saxophonist Alex Hoffman, the brilliant pianist Rob Schneiderman, bassist David Wong, and drummer Pete Van Nostrand). Now, on November 12, 2013, the second volume of Unsung Heroes is at last available on CD.

The elements that make Unsung Heroes stand out among the many superficially similar “straight-ahead jazz” releases of the past few years are numerous and sharply marked. First, the concept: far from being a rote “celebration” of the obvious jazz icons, Unsung Heroes plumbs the rich depth of the music in exploring the work of such underappreciated masters as (on the second volume) trumpeters Tommy Turrentine, Idrees Sulieman, and Joe Gordon. Having access to unrecorded scores (courtesy of publisher and project supporter Don Sickler of www.jazzleadsheets.com) and other primary sources of these artists created the possibility of recording new and unheard music for these sessions, in contrast to either a rote recitation of a previously recorded version or a “reimagining” remote from the composer’s intention. And most of all, the fresh, unforced quality of the performances throughout sets Unsung Heroes apart from those present day releases that all too often exhibit the “anxiety of influence”, either by the slavish obedience to it or the headlong flight from it. The musicians of Unsung Heroes are secure in their ability to make swinging, straight-ahead music without cliche, and Unsung Heroes Vol. 2 is further confirmation of that fact. The Unsung Heroes project is an affirmation of the continuing relevance of the form when it’s done right!

THE UNSUNG HEROES PROJECT ON DIGITAL: Vol. 1 and 2 available on ITunes, eMusic, and Amazon
Both volumes along with alternate takes from the sessions (Unsung Heroes Vol. 3) and play along versions of Unsung Heroes tracks are available at the Hollistic MusicWorks Bandcamp site: http://brianlynch.bandcamp.com