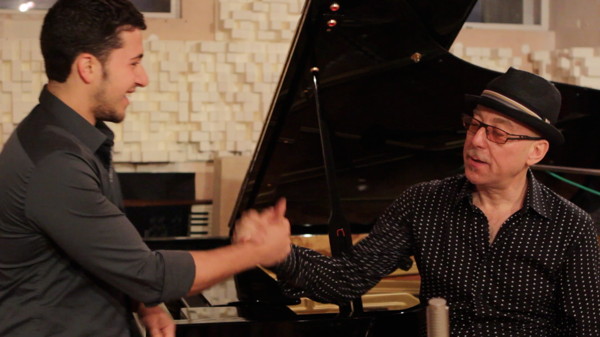 Kickstarter is the pioneering crowd funding platform that has become the support vehicle for creative artists ranging from Spike Lee to your local creator down the street. Kickstarter and Hollistic MusicWorks are no strangers to each other, with Brian Lynch’s Unsung Heroes recording project being supported by funding from a successful Kickstarter project in 2010.

With Kickstarter all funding Is dependent on the overall fund raising goal being reached, and in a limited amount of time; in this case the deadline is September 12, which happens to be Brian’s birthday!

The collaboration between Grammy© Award winning trumpeter Lynch and new star on the modern jazz horizon Cohen is shaping up to be one of the must have discs for 2013-2014. Joined by legendary drummer Billy Hart and master bassist Boris Kozlov, Lynch and Cohen present a quartet program of originals bridging traditional and contemporary sounds with virtuosity, passion and swinging aplomb. As a duo, they essay and recast jazz classics and standards with warmth, intelligence and lack of cliche.

Funding proceeds from successfully reaching the Kickstarter goal will go towards completing the production of the recording (mixing, mastering, and manufacturing), as well as publicity, promotion and other support for the CD and digital releases. We want to give this music the exposure it deserves!

Support Brian and Emmet as they bring their opus to fruition! A variety of exciting rewards await those who choose to support these intrepid and talented artists in their present musical journey. Rewards are tailored to all different levels of support as well as type of supporter, from fan to patron of the arts and corporate sponsor.

Learn about the Brian Lynch / Emmet Cohen Project and pledge your support here.

Listen to rough mixes from the Quartet and Duo:

Duo: How Deep Is The Ocean

Thanks For Your Support & Keep Swinging,