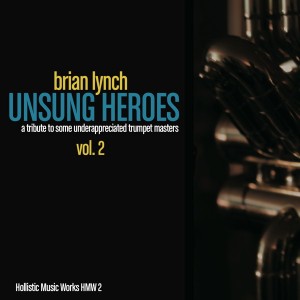 “Lynch is one of the finest trumpeters we have in jazz….a clean, precise and soulful soloist who always knows how to deliver the essence of a song…. Here’s hoping this “unsung” project gets the recognition all of these artists deserve on next summer’s festival circuit.” Frank Alkyer, Downbeat Online http://www.downbeat.com/defaultl.asp?sect=editorspicks201312

“Here’s a delightful manner in which to spend some quality listening time enjoying decidedly modern, positive and fresh interpretations of music that simultaneously embrace the heritage of past masters and allows our current masters opportunity to shine.” Rick Erben, Jazz Radio KIOS http://kios.org/post/jazz-cd-month-brian-lynch-unsung-heroes-volume-2-hollistic-music-works

Dec. 19, 2013 – The new CD release by Grammy© Award winning trumpeter Brian Lynch, Unsung Heroes Vol. 2, has been brightening up the 2013 holiday season for listeners with impressive initial showings on jazz radio playlists and critics’ lists. The followup to Lynch’s acclaimed Unsung Heroes, a 5 star Downbeat pick and top radio disc of 2011, entered the JazzWeek radio chart as its top charting debut and has risen to the Top 20 (#19) in its second week on the industry standard list. In the process, the disc received Album of the Month honors for December by powerhouse jazz radio station KUVO (Denver) and Jazz CD of the Month kudos from Omaha’s KIOS. Unsung Heroes Vol. 2 is also an Editor’s Pick for December by Downbeat Online and is making its way onto many critics’ favorites lists of the season.

The second volume of his Unsung Heroes project extends trumpeter Brian Lynch’s salute to underappreciated trumpet masters in fine form. From the same sessions as the acclaimed Unsung Heroes CD (5 Stars in Downbeat Magazine), Vol. 2 continues the mix of little known or unrecorded compositions by “under the radar” jazz trumpeters such as Idrees Sulieman, Tommy Turrentine, and Joe Gordon with original Lynch compositions in the spirit of these trumpet maters. In Unsung Heroes Vol. 2, Lynch and his crack band (including alto sax great Vincent Herring) pay tribute “in the tradition” while staying fresh, creative and highly swinging. Lynch’s trumpet work shows why he’s considered one of “the best and busiest trumpeters in jazz…” (Jazz Times Magazine)

Lynch was recently featured in a full length profile in Jazz Times magazine (October 2013) and will be featured in an upcoming article for Jazziz.

Listen to a track from Unsung Heroes Vol. 2 :