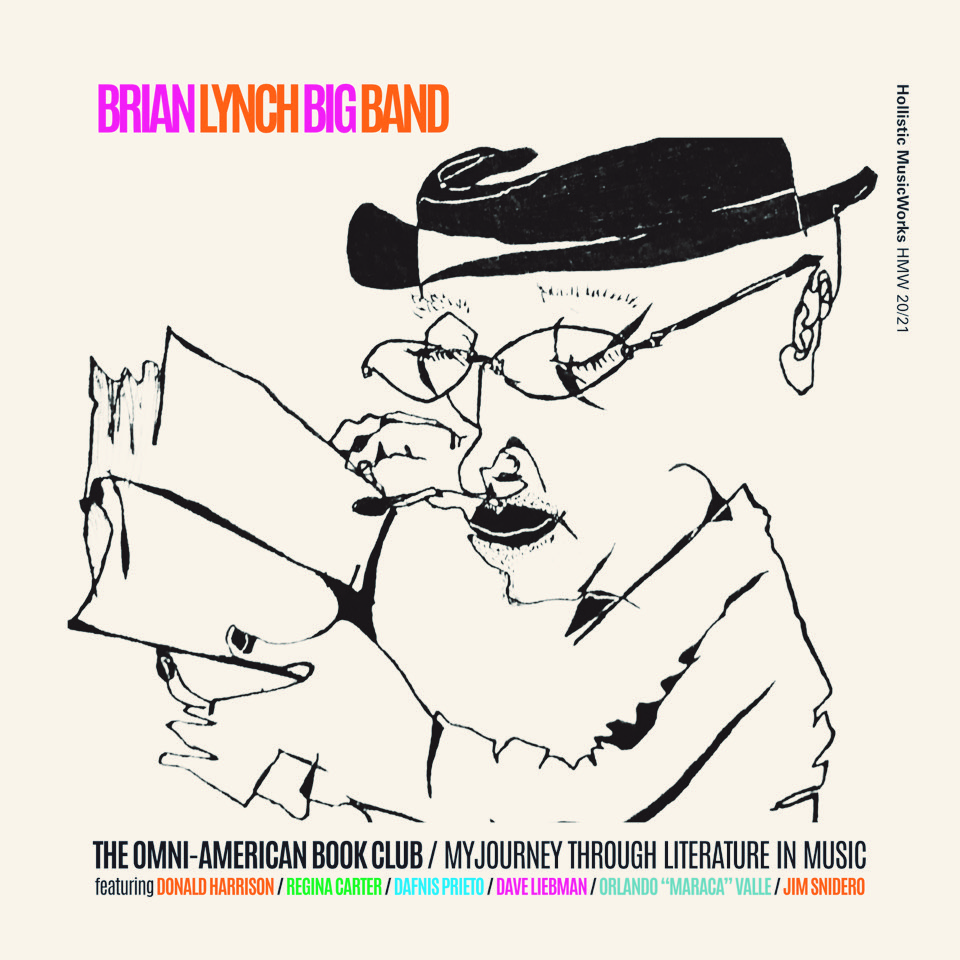 Hello All,
It’s been quite a while since I’ve reached out to you directly. I try to keep folks informed of my doings as much as possible via the various conduits of social media as they unfold, but the sort of organized recounting of past events that goes into a newsletter has seemed be too daunting for me amidst the onrush of new ones. There comes a time, however, when the personal urge to share something important, so exciting that I’m almost bursting to let you all know about it, demands that I stop and take the time to communicate.
For the last six months, the primary focus of my creative life has been on the composition, execution and production of my first ever big band project. After over thirty years of recording as a leader, and more than ten years of charting my own course as a recording artist through self-determined and autonomously executed projects, this is my biggest one yet. And somehow I’ve managed to pull it off in less time than any of my other albums, whether on my own label or for others. I’m exhausted from the non stop labor, but even more proud of the result. I think this album is the finest thing I’ve ever done. It’s a summation of my work in a sense; but it’s also a new departure for me as I reveal more about myself as a person through the theme of the music.
I invite you to read about the music, the theme, and the great artists involved in the making of The Omni-American Book Club below. The album was released digitally worldwide on August 29th, and the deluxe 2 CD set of the music with a 16 page booklet and featuring the phenomenal artwork of Robin D. Williams will be out by the end of this month. You can listen to or download The Omni-American Book Club now via the new and improved Hollistic MusicWorks site.
There will be more to come as this release gathers steam – I will keep you posted! Thank you for your time and interest in my efforts.
Brian Lynch
Hollistic MusicWorks

GRAMMY® Award-winner Brian Lynch Pays Homage to Legendary Authors and Literature
on The Omni-American Book Club: My Journey Through Literature in Music,
New Album OUT NOW on Hollistic MusicWorks

GRAMMY® Award-winning trumpeter and recording artist Brian Lynch is proud to announce the release of The Omni-American Book Club, his long-awaited new recording on Hollistic MusicWorks. One of the most ambitious projects of his long and illustrious career, The Omni-American Book Club is an expansive album of music for large ensemble (“big band”) composed and arranged by Lynch and featuring his work as soloist alongside an all star cast of special guests including Regina Carter, Donald Harrison, NEA Jazz Master Dave Liebman, GRAMMY® Award winner Dafnis Prieto, Orlando “Maraca” Valle, and Jim Snidero.

On The Omni-American Book Club, subtitled My Journey Through Literature In Music, Lynch connects his lifelong passion for reading and the books that have shaped his life with his original music. The album’s title refers directly to one of those books, The Omni-Americans by the African-American writer Albert Murray, which Lynch first read in high school soon after its initial release in 1970. Producer Kabir Sehgal writes in his liner notes: “…(Murray’s) life-affirming commentaries and provocative essays on culture and society are insightful and evergreen. His writings have served as a foundational philosophy for the jazz intelligentsia and aficionados alike… Murray holds up a mirror to American society and calls out the powers that be.” And indeed, reading Murray’s book and absorbing his thesis that black American culture was central to the whole idea of America was a key event in the budding, but already sharply defined, social consciousness of the young Lynch, even as he found himself being inexorably drawn to the study and practice of black American and other Afro-diasporic musics as his life’s work.

The books that have shaped Lynch’s consciousness, and thus his music, have been myriad, and his dedications for the music of The Omni-American Book Club reflect both the diversity and the focus of his reading interests. Alongside a strong emphasis on the work of African-American writers and writing on African-American culture, both classic and contemporary (Murray, W.E.B. DuBois, Ralph Ellison, Isabel Wilkerson, Ta-Nehisi Coates), Lynch’s reading interests range widely in the area of social consciousness and social justice, as reflected in shout outs to urban theorist Mike Davis and social activist Naomi Klein.

Lynch’s voracious appetite for reading history is amply illustrated in dedications to David Levering Lewis, Eric Hobsbawm, and Nell Irwin Painter, and his interest in the realm where history connects to current events is shown in work linked to recent writings by historian Timothy Snyder and journalist/activist Masha Gessen. For Lynch, reading is “a means to fill in the blank spaces in the map of your world”, and his research over the years to deepen the understanding of the music that he is such an able practitioner of shows in dedications to Amiri Baraka, Robert Farris Thompson, A.B. Spellman and Ned Sublette. And rounding out a list of authors that, given the depth and breadth of Lynch’s bookworm instincts could never be more than partial, dedications to the seminal Nigerian novelist Chinua Achebe and vulnerability researcher Brené Brown hint at still more facets of Lynch’s reading interests.

But what of the music that all these authors inspired, whether directly or indirectly? The nine compositions that make up The Omni-American Book Club offer a panoramic view of Lynch’s world as a composer, arranger and trumpet soloist in his first big band recording as a leader. Lynch’s pieces reveal new facets of a musical omnivorousness already well documented in his four decades of being at the forefront of the jazz and Latin music scenes. Besides works expanding on his well known (and Grammy-award winning) prowess in playing and writing both Afro-Caribbean jazz (“Crucible For Crisis”, featuring drummer/Grammy laureate Dafnis Prieto and virtuoso flautist Orlando “Maraca” Valle, and “Affective Affinities”, featuring violinist Regina Carter), and “straight-ahead” swingers inspired by his tenure as a young man in the legendary bands of Art Blakey and Horace Silver (“Tribute To Blue”, featuring alto saxophonist Jim Snidero, and “Woody Shaw”), Lynch casts his musical net even wider on The Omni-American Book Club.

Hip hop, trap and funk influences are deftly blended with sonorous brass choirs and shouting full band passages on “The Struggle Is In Your Name”, featuring New Orleans icon and frequent Lynch collaborator, saxophonist Donald “Big Chief” Harrison. Reggaeton beats and salsa grooves coexist with massed horns, dissonant counterpoint and snaking solo lines in “Inevitability and Eternity”. Swing and Latin rhythms seamlessly coexist in the company of virtuosic band work and the keening soprano sax of NEA Jazz Master Dave Liebman on “The Trouble With Elysium.” Percussion comes to the fore on the evocative, multi-hued “Africa My Land”, and another Lynch chart that delights in the application of pleasing orchestral pastels, “Opening Up”, is by turns delicate and driving as the mood shifts from bossa to angular cha-cha grooves. The music of The Omni-American Book Club represents the most realized and accomplished expression of Lynch’s vision as a composer to date.

The magic is made by the stellar big band that Lynch assembled for this project. This challenging music is expertly executed by an ensemble comprising Lynch’s teaching colleagues, students and recent alumni of The Frost School Of Music, University Of Miami, where Lynch has been a professor of Studio Music and Jazz since 2011, along with a selection of world class musicians gracing the Miami area. Both in ensemble and solo work, their efforts and dedication to Lynch’s compositions resulted in the realization of his music to the highest order, and is a testament to the vibrancy of musical life in the South Florida region and in one of the world’s premier music schools – The Frost School Of Music. Recorded by Chris Palowitch in the Frost School’s state of the art L. Austin Weeks Center for Recording and Performance, and mixed and mastered by famed engineer Dave Darlington (winner of a Grammy for his work with on Lynch’s 2006 award winner Simpático), this album is a feast for the ears and a sonic delight.

Tying all the music together is the sound of Lynch’s trumpet. His focused and versatile facility on the instrument and expansive improvising lexicon sets him apart on the contemporary jazz landscape. His achievement in crafting an individual and recognizable voice from many influences, and utilizing that voice in many diverse playing contexts ranging from Eddie Palmieri to Phil Woods and even Prince, are reflected in his consistent presence in the jazz polls and on the lists of top trumpeters, including an award as Trumpeter Of The Year by The Jazz Journalists Association in 2017. But perhaps in the performance of his own original work one can most fully hear both the true accomplishment and the continued promise of Lynch’s work as an improvising trumpet player. Lynch stated his intentions to journalist Ted Panken for a Downbeat profile a few years ago: “…to blend everything together into something that has integrity and sounds good. Not to sound like a pastiche or shifting styles; but like someone with a lot of range and understanding.” His playing on The Omni-American Book Club is one of the most complete expressions of this laudable goal that he’s yet achieved.